Sleep Apnea is a sleep disorder in which, during sleep, there are periods of shallow breathing or pauses in breathing.  These periods of shallow breathing or pauses are known as hypopnea, and every pause in breath, which lasts at least 10 seconds (but can vary in length), is known as an apnea. These episodes can occur dozens of times an hour.  According to the American Sleep Apnea Association, there are an estimated 22 million people in the United States who suffer from sleep apnea.  The most common type of sleep apnea is known as Obstructive Sleep Apnea. It is defined as such because, during sleep, the muscles at the back of the throat essentially collapse inward obstructing the airway, thus blocking  airflow. This results in shallow breathing or pauses in breathing. 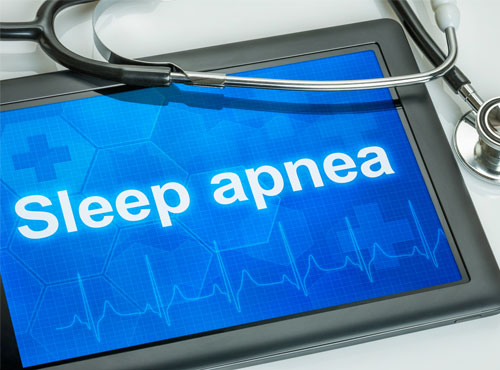 Obstructive Sleep Apnea is a more common condition in those with obesity. A larger than normal neck circumference puts one at greater risk for sleep apnea.  Uncontrolled sleep apnea disrupts sleep and results in low blood oxygen levels. This is a serious and sometimes life-threatening condition that can cause heart disease, hypertension, stroke, and even chronic heart failure.

What Are The Symptoms and Signs of Sleep Apnea?

Sleep Apnea can be difficult to diagnose simply because the episodes happen during the night when no one witnesses the event. Some symptoms can include chronic snoring, ongoing fatigue that interrupts daily activities, sore or dry throat upon waking, headaches, difficulty concentrating, sleeplessness, depression and mood changes.  A widely accepted sign of obstructive sleep apnea is a larger than normal neck circumference (greater than 17 inches for men, and greater than 15 inches for women).  If you are concerned that you may have sleep apnea, it’s important that you see a doctor who can order a sleep study (which tests your sleep habits during your sleep).

Since being overweight and obese can lead to sleep apnea, losing weight is necessary in order to improve sleep apnea.  Research studies have shown that individuals who lose their excess weight are up to three times more likely to eliminate their sleep apnea for good.

On my last visit to my cardiologist, I was deeply disturbed by his evaluation of my health. He recommended that I see Dr. Obi at Worthy Weight Loss because several of his patients had experienced good results.

So far, I have gone down 4 pant sizes and have lost about 40 pounds. That FEELS very good physically and psychologically. The cardio benefits of this has been triglycerides dropping from 342 to 104! My blood sugar level was 125 and now it’s 94.

Due to the evolving situation of the Coronavirus (COVID-19), we have temporarily switched all our patient appointments (new and existing) from in-office to virtual appointments, to continue to provide care to you. We utilize a secure, HIPAA compliant Telemedicine platform for these appointments. Please call our office at (972) 818-8800 for more information. Thank you.